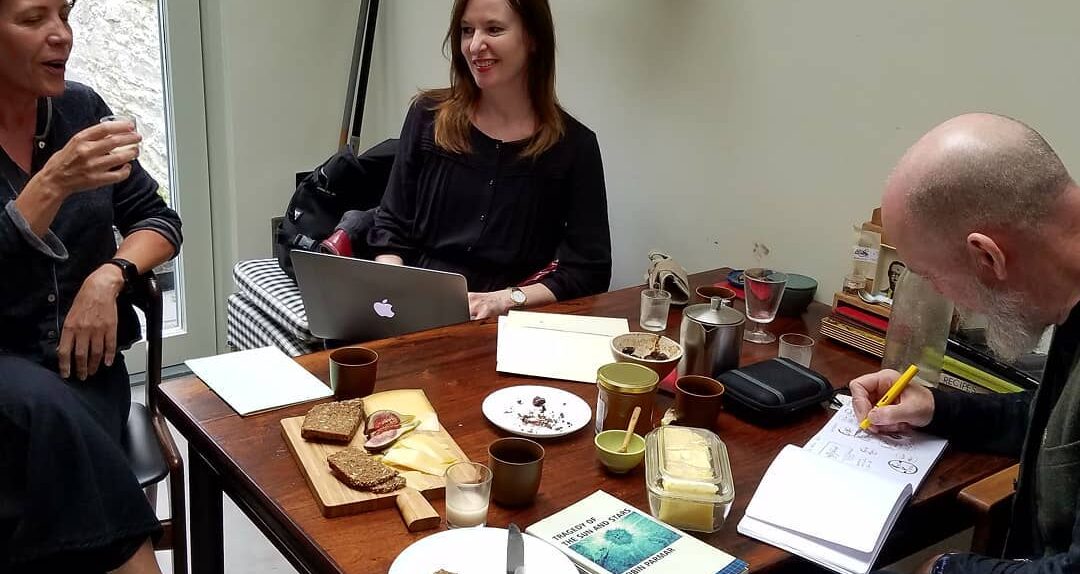 We had just had a new cabinet constructed for a new iteration of our piece Cabinet of Curiosities – Cabinet of Curiosities a dó – and were starting to play and make a new score when lockdown happened last March. We had planned to take this new cabinet to Sherkin Island Gallery, Uillinn –  West Cork Arts Centre, and the Crawford Museum in the first half of this year. We will continue to pursue these engagements as soon as it is possible to do so.

Cork-based poet Graham Allen had meanwhile sent us a new piece he had written: ‘G’, a piece for two male actors and a musician, and we decided to adapt the text slightly for two female performers and play with it on zoom, see how that might work – given that everything was happening on zoom at the time. After many takes we came up with a recording that all three of us were ‘sort of’ satisfied with and gave it to video artist and sculptor James McCann, whom we’ve collaborated with in the past, as a kind of canvas to play with and see what he might come up with. He’s currently working on it. This would be a piece for a gallery. Ultimately playing on / with zoom was a way for the three of us to keep our collaborative conversation and energy going, so when we were able to get back together in person – socially distanced – in the summer, it didn’t feel like our ‘conversation’ had stopped.

An important development for us this past year, was that we have begun to work with a young producer, Ciara Hayes, a graduate from the UCC MA Arts Management and Creative Producing, in an ongoing capacity. With the dearth of producers in Ireland, we’ve always a) found it difficult to find a producer, even on a project by project basis, and b) impossible to find someone who could take us on as a project. We also re-visited another piece by Graham Allen last summer Earthangel (Cork MSF, 2008, Unitarian Church), deciding that an audio recording could make for an interesting iteration of the piece in the current climate. The piece was recorded in the summer in Cormac O’Connor’s recording studio, The Maple Rooms, and we decided to disseminate it online as an audio piece that people – anywhere in world – could download onto their phone for a limited period and choose their own setting, which would inform their experience of the piece, ie create their own unique, internal piece of theatre in dialogue with our recording. We made some suggestions – in a darkened room, by running water, on a hilltop etc. We also asked people to feedback on their experience, and it got some really nice responses – one audience member in South Korea, for instance, had chosen to experience the piece in a playground, at night, which lent it an eerie quality. The dates for that were Sat / Sun 6th – 7th November 2020.

As our long-term collaborator Phillip Zarrilli had passed away on 28th April 2020, we also decided to disseminate the video recording of a collaborative, co-created piece playing ‘the maids’, which had previewed in Cork MSF in 2014 and premiered and toured in Wales in 2015 (funded by AC Wales) in the year of Phillip’s death. We dedicated this sharing to Phillip (18th – 20th December) and donated proceeds to the hospice where he died (Hospiscare, Exeter).

In terms of projects in the pipeline going forward, we have lots of plans, also for new projects, and are just trying to work and plan as best we can under the circumstances, to be in a position to present work live as soon as it is safe to do so:

We are re-working our adaptation Killing Stella with Mick O’Shea as musician/ sound artist, Bernadette Cronin as actor, and Regina Crowley as director, and are collaborating with videographer Harry Moore and Sound technician Peter Venus to create a film of the piece. We have an invitation from the Ingeborg Bachmann Centre  in London to show the piece streamed from the Austrian Cultural Forum for an event in May 2021 to commemorate the centenary and 50th anniversary of the birth and death, respectively, of the Austrian author, Marlen Haushofer, whose novella our piece is adapted from (moved to the online platform).

The Four Seasonings: We have also been invited to perform for the ‘…… is theatre’ project in Alicante, hosted by Just Art Association, based in Alicante, Spain, next July, subject to covid restrictions.

Prometheus Now: we are also working on a new piece entitled Prometheus Now, a collaboration between the three members of Gaitkrash and concert pianist Gabriela Meyer. This piece focuses on the mythical figure Prometheus – fire-bringer, hero to humans, trickster, survivor.. In the first instance we will make a video piece to be shared virtually, in the longer term to be performed live. (seed work funded by CIT Arts Office).

Research: we’re also writers, so that aspect of the work can continue unfettered by lockdown. Bernadette Cronin is co-editing a case study collection with Korean collaborator Jeungsook Yoo on playing ‘the maids’  for Methuen, to which all of the collaborators are contributing (forthcoming 2022).

Bernadette Cronin and Regina Crowley are co-authoring a book on the voice work of Kristin Linklater, our teacher, who also passed away last year (June 5th, 2020), for the Routledge practitioner series (forthcoming, 2022).